Planet Jupiter in Astrology – Importance Of Jupiter in the Birth Chart 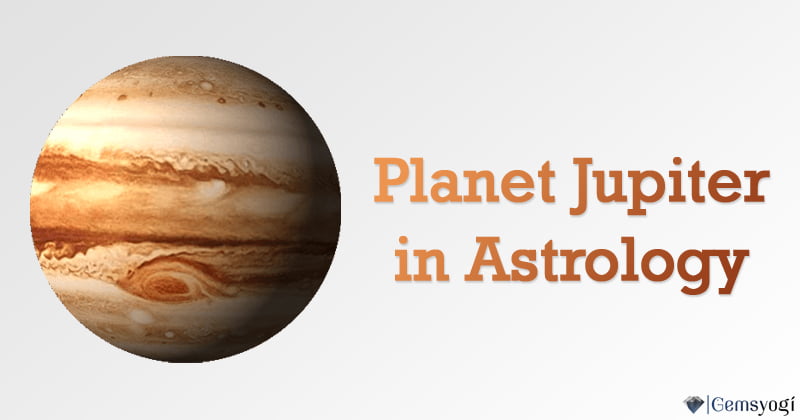 After exploring the astrological planet Mercury, we have now moved into Jupiter. In Vedic astrology, the planet Jupiter is considered as Guru, Devaguru, and Brihaspati. Its the largest planet in the solar system, and its a planet associated with expansion, growth, guidance.

Jupiter or Brihaspati is also one of the most benefic planets in astrology, which rules the Saggitarius and Pisces sign. It’s a planet of good fortune and represents growth and opportunity. The way we open our minds, build awareness around us, live our life, our point of view are all influenced by the planet Jupiter.

Jupiter also represents higher learning, and that’s why its considered ‘Guru’ in Vedic astrology. Since its a planet that promotes growth and opportunity, things like Education, Wealth, Wisdom, Luck, Knowledge were directly tied to Jupiter’s influence.

Jupiter is the bestower of Success

Your urge to succeed in life, do something new, take risks in business is all decided by the placement of the Jupiter in your chart. It’s an extremely beneficial planet, and its aspect of bad planets can keep their evil influence in check.

In Vedic astrology, Jupiter is also said to be the bestower of success because it also signifies optimism, faith, hope, and these are the things that dive us through the toughest of time. So, it was the Jupiter that gives us faith and hope to think about the positive even in the adverse situation.

When it comes to representing a character in your life, Jupiter represents teachers, spiritual gurus, professors, and every elderly person. The planet Jupiter also indicates spiritual growth, and it promotes spiritual progress. A well placed and strong Jupiter is usually found in the chart of philosophers, teachers, religions leaders, judges, priests.

Jupiter if well placed can do wonders

A well placed Jupiter can promote wealth, luxury, good health, position, authority, and power. It’s also a karaka for children in the chart, and husband on a female horoscope. Jupiter sitting alone in any house usually gives good results related to that house, and since its a planet of expansion, it expands the qualities of any house that it sits in.

A strong Jupiter in a chart also indicates prosperity, positive mindset, urge to explore, optimism, success, will power, spiritual progress, sense of justice, good teachers. People with a well placed Jupiter will look confident, bright, and will be well-wisher.

On the negative side, the weakly placed Jupiter indicates low self-esteem, lack of direction, pessimism, depression, and exhaustion. Too strong Jupiter in a chart shows an overly optimistic attitude, wrong decisions, and lack of spiritual connection.

Jupiter takes 13 months to orbit one zodiac sign and 12 years to orbit the whole zodiac. The friendly planets of Jupiter are Sun, Moon, and Mars. The enemy planets are Mercury & Venus, and it’s neutral towards Saturn & Rahu. The color associated with planet Jupiter is Yellow, and the precious stone is Yellow Sapphire.