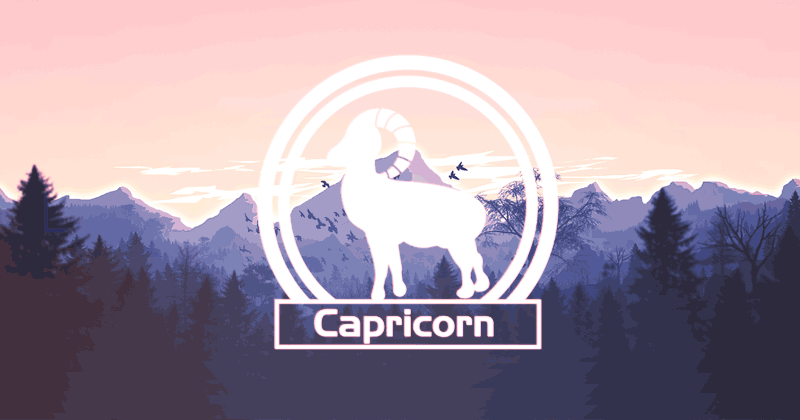 We have now moved into the tenth sign of the zodiac, which is Capricorn. Natives born between December 22 to January 19 have Capricorn sun sign. The sea goat represents the zodiac, and the element is Earth. Saturn rules Capricorn.

Before exploring Capricorn, let’s know about the symbol. The Symbol of Capricorn is sea-goat. As we all know, Goats knows pretty well that if they have to enjoy the clear and fresh air, they have to climb to the top of the mountain. Just like that, Capricorn borns always loves to progress onto greater heights.

The ruling planet of Capricorn is Saturn, which is a planet of struggle and a hard taskmaster. These people are usually very matured, serious, and very disciplined.

It might be hard to believe, but some of the best politicians, teachers, scientists, in the world were born with Capricorn sign. People born with this sign usually have an enormous desire to climb higher with every achievement.

They typically set goals which look realistic and will provide them with security. Capricorns are also very strong emotionally, especially when achieving their goals as they don’t let anything distract them from getting ahead.

Those born with Capricorn are extremely dedicated individuals and they can work for long hours to complete tasks on hand. Their patience and disciplined nature often help them to maintain their focus on the long-term prize.

People born with Capricorn can analyze different situations with a cool head. They don’t have much space for emotional, illusions, jealousy, laziness, and they believe that these things are useless in life.

Determination, Patience, Discipline – these three things are the most important thing which decides the career & money. Capricorns specializes in these three sections. People born with this sign are highly determined, and they can push themselves beyond their limits to achieve what they want.

While most of the zodiacs struggle when put under pressure, Capricorns shines bright. These natives love to challenge themselves, and they are very good at setting boundaries.

On workplace, Capricorns were often the first in and last out, and they follow the slow, steady, and methodical way to approach their goals. Slow, Steady, and systematic nature is because of the ruling planet Saturn, which is the planet of discipline and hard work.

It was the mindset which decides their future, Capricorns takes careers very seriously. From the start to the very end, they take every task as a mission which they need to accomplish at any cost. Once they start, they never look back and put on their immense hard work right from the beginning.

Capricorns are always driven towards success, and they will never let anything get in their way. These are the people who can go the extra mile to complete their jobs. Since they have a deep desire to make a long-lasting and secure career, they tend to become workaholic. Their workaholic nature sometimes sidelines their personal lives as well.

As we know, these people were also very cool-headed, so they can’t be manipulated or pushed into doing other things until they feel so. These people are very good decision maker because they got the ability to analyze different situations with a cool head. This is what makes them a great leader or businessman.

If you have a friend or family member who looks more mature and logical than others, then check out he/she might be a Capricorn. Due to their logical and rational mind, they can easily spot people who are manipulative. When it comes to friendship, Capricorns usually have a small group of friends, but the loyal ones.

Capricorn really values the lifelong friendship and their friendship usually starts from childhood. If we talk about the love & relationship, winning their attention and heart can be challenging due to their difficult character.

Since the ruling planet of Capricorn is Saturn which is known for being slow, these people find it hard to express their love. People born with this sign wants to take charge and be the one to make rules from the beginning, especially on the relationship front. These people command respect but never try to dominate their partners.

If a Capricorn is deeply in love, they will work hard towards the growth of their relationship. They tend to become protective and caring individual all of a sudden. When deeply in love, these people become very serious and they look at the person as their family. However, Capricorns often hide their feelings just to avoid exposing themselves too much.

People born with this sign are also very stubborn as they believe that their decisions are always right. These natives don’t want to be wrong, or they don’t like to admit that they are wrong. So, if anyone gives any advice, they just discard it, which often hurts the other person.

Since Capricorns thrives success at any cost, sometimes they tend to become selfish. They believe that everything is fair in love and war, so, they will keep the valuable information and resources to themselves to gain an advantage against others. This thing sometimes gives the impression of being selfish.

People born with this sign usually have an enormous desire to climb higher with every achievement, and they expect superior results from both themselves and others. However, since life doesn’t always offer us what we want, Capricorn borns tend to fall into depression when they don’t get the appropriate outcome.

Since the ruling planet of Capricorn is Saturn, these people take too much time to open up. They are good at communication when it comes to business, but when it comes to a personal relationship, they can be really shy.

Capricorns are achievers, and they can put in lots of hard work to pursue any goal. However, these natives are never satisfied, and it doesn’t matter how much they achieve, they always think they are ‘under-achievers’.