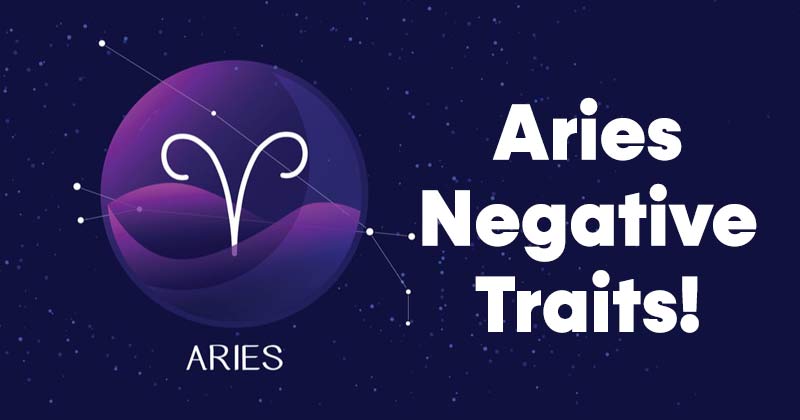 Aries, being ruled by the planet Mars, is the one who is known for their hard work and aggression. These people never hesitate to speak the truth, regardless of whatever be the outcome.

Being filled with positive energies, Aries borns makes up to be a great leader. They possess a strong leadership trait that is unmatched by any other zodiac sign.

The mars influence on Aries makes a person short-tempered. You will never know when a single joke could make Aries unhappy and trigger anger. However, the good thing is that their anger dissolves very quickly, but the damage is usually done within a short period.

Although not as stubborn as Taurus, Aries still has some stubbornness in their personality. If they say they will do something, that means they will do it, whether it’s a bad or good thing. However, their stubbornness sometimes makes it hard for other people to handle them at times.

Being aggressive by nature, Aries, at times, can be arrogant too. Aries is considered to be the most arrogant of all zodiacs. Most often or not, they end up hurting their near and dear ones. However, the sense of arrogancy is often triggered by an aggressive nature. So, if the aggressive nature is controlled, their arrogancy can be minimized.

Mars energies are all about actions and domination. They often participate in events where a little bit of risk is involved. However, at times they tend to become impatient. They want everything to be quick. If they need something, they will most probably need it now.

Another negative of Aries is that they always want to become the center of attraction for everything. If that thing doesn’t happen, they become irritated quite quickly. In professional life, they always want to do things better than others, which is a great thing, but they can go to extreme lows & highs to achieve that.

Being a fire sign, Aries is extremely energetic and were always driven to make things big in their life. However, to achieve that feat, they sometimes try to command others. They are the ones who will be controlling the entire household and will have the last word in all essential matters.

Aries is probably the most insensitive sign in the entire zodiac. It’s not that they don’t understand others, but they will need a logical reason to understand. When it comes to understand the feelings of others, the chances are they won’t pay much attention to it.

Mars being the ruling planet of Aries, the Aries man or woman will seek justice to all wrongs done to them. It’s actually a good thing, especially in the Kaliyuga. In KaliYuga, the one who fights for the wrongs wins in the end. So, Aries are highly revengeful, and they struggle to forgive or forget.

Please note that both positive and negative traits of Aries are a part of personality. The planetary combination in your natal chart will speak more about your personality.

Vastu Tips for Main door/ Entrance for Home and Office

Direction for the Staircase according to Vastu Shastra