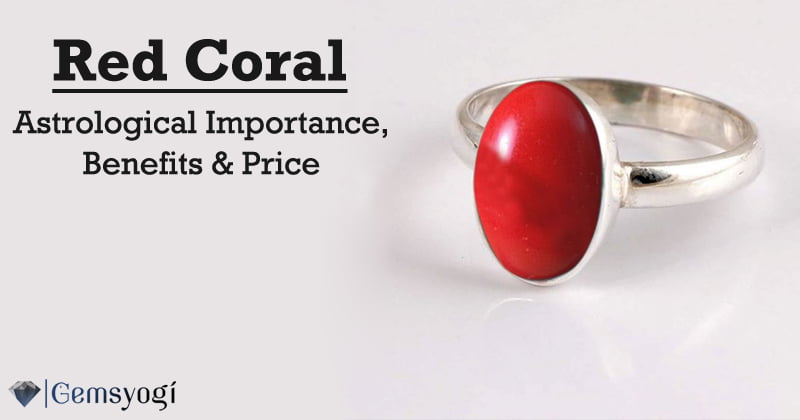 As we all know, gemstones play an essential role in Vedic Astrology. There are nine planets in Vedic astrology, and they all have gems. The gemstones were said to enhance the positive effects of planets in our lives.

Red Coral, in some region, it’s also known as Moonga or Praval, is one of the nine precious gemstones which is popular in the astrological world. While some gemstones like Pearl, Diamond, etc. were used for jewelry purposes, Red Coral is mostly known for its astrological benefits only.

Just like Pearl, Red Coral is also formed under the sea. Corals are mostly composed of calcium carbonate, and it’s available in different color shades. The Red ones were known as Red Corals. Similarly, there are White, Pink, Black corals as well.

All different color shades play different roles in astrology. Out of many forms, the Red corals are the most popular, and it has a specific gravity of 2.68. The hardness is pretty much similar to the Pearl as it’s also made of Calcium carbonate, and it weighs less than 4 in the Moh’s scale.

It’s a non-transparent stone and associated with Planet Mars in astrology. 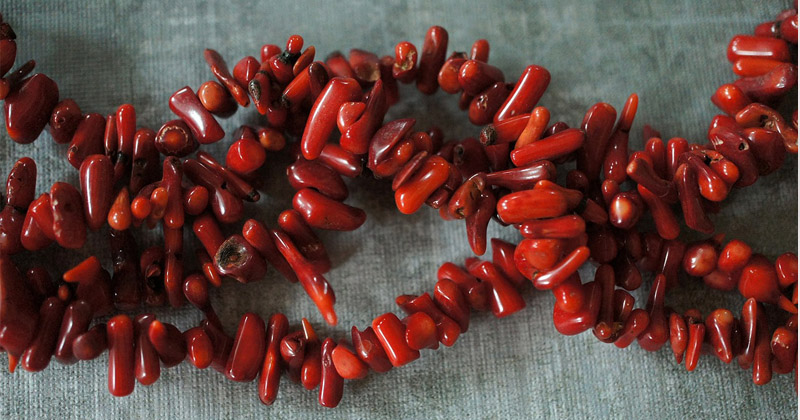 The energies of Planet Mars is directly linked to Red Coral stone. So, to properly understand the importance of Red Coral in astrology, one needs to understand the role of Mars in our lives.

Mars is a hot and fiery planet, and it represents the energy, passion, anger, drive, and determination level in our life. So, the gemstone is said to enhance or reduce these things in lives.

Astrologers often suggest Red Coral to enhance the auspiciousness of Planet Mars or to deal with certain wrongs in the wearer’s chart. The benefits of Red Coral might vary depending upon the placement of Mars in the birth chart.

Benefits of  Red Coral or Moonga 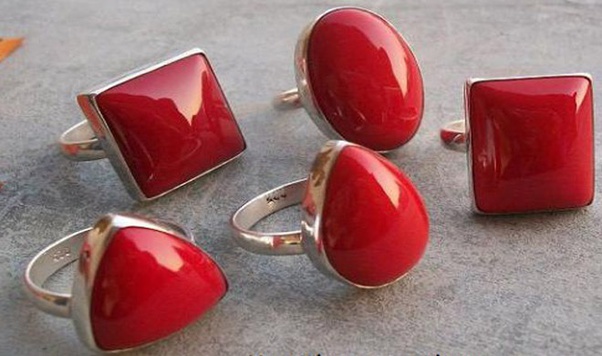 Mars plays a vital role in one’s life. It decides your determination level, your ability to fight, your ability to survive worst situations, etc. Not only that, but it also rules over your anger, passions, and energy.

Vedic Astrologers suggest red corals to enhance the power/energy of Planet Mars. Also, it’s used to deal with certain wrongs in the chart.

People who procrastinate a lot and have a pessimist attitude also get benefitted by wearing Red Coral stone as it improves the energy level. It boosts the energy level and bestows vigor and hope to the wearer.

Since the gemstone is associated with planet Mars, which is the commander of the army of God, it also grants fighting abilities to the wearer. The gem is often suggested to athletes to improve the energy level.

In India, this stone is widely used to remove the Kuja Dosa and Manglik dosa from a person chart. Apart from that, it’s also said to protect the wearer from bad luck and black magic.

Who Should Wear Red Coral / Moonga

Red Coral is associated with Planet Mars, which is the commander of the army of God. So, it does have a powerful impact on one’s life. Every physical action that you take is a result of Mars’s energy. So, wearing this stone without proper analysis can invite lots of troubles.

It’s always recommended to seek an Astrologer’s help before wearing Red Coral. Now, if we come to the main question – Who should wear Moonga? I would say, anyone who wants to beat laziness and want to achieve monotonous tasks could consider this stone. If you can’t control your anger and if you want to improve your confidence and mental health, then you can wear this stone.

If you have a problematic married life and want to improve your relationship with partner, then you can wear this stone. Red Coral improves blood circulation and regulates blood pressure. So, it can be worn by someone who is struggling with high blood pressure and blood-related troubles.

Vedic Astrologers suggests red coral to the wearer during the Mahadasha and Antardasha of Mars to enhance the auspicious results. It’s also recommended when the Planet, of course, Mars is badly aspected by other planets.

Generally, Scorpio, Sagittarius, Leo, Cancer, Pisces, and Aries Ascendant natives can consider this stone, but only after getting the approval of expert astrologer.

Who Should Not Wear Red Coral?

Gemstones are much like medicine, if it doesn’t suit you, it will destroy you. Also, the quality of the gemstone matters a lot. For instance, if you are wearing a cracked gemstone, then it will have adverse effects.

Astrologer will only suggest you gemstone if you really need it. So, before wearing a Red Coral, it’s always recommended to have an astrologer’s suggestion.

Red Coral is one of the famous gemstones, and it’s found in almost every part of the world. However, out of all, the Corals found in Sri Lanka were more superior. The Sri Lankan red corals have a great glow and have a great shape. 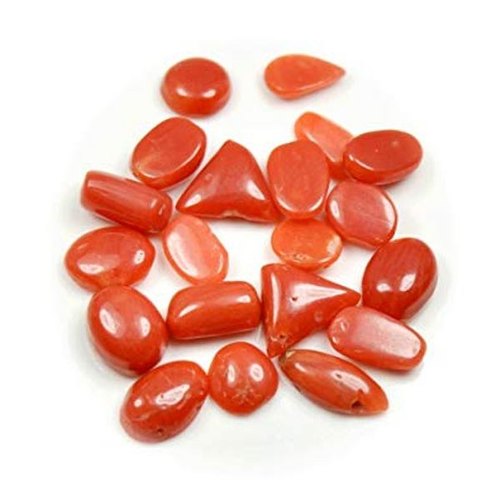 The pricing of Red Coral depends a lot on the origin, shape, color, and overall quality. For example, the Japanese red corals look good and have great color shade, so they are the most expensive corals.

Similarly, the low-quality corals might cost you around Rs. 500 Per Ratti. Also, just like every other gemstone, Moonga stones were treated to enhance the quality and luster. The treated one can influence the price of Moonga stone.

The natural one with bright red shade will be more expensive compared to the one with light shade. The Man-Made corals were of no use, and they don’t have any value in astrology.

So, the Price of Red Coral or Moonga stone can range anywhere between Rs.500 to Rs. 14000 per carat. One should always purchase the natural one without any treatment.

What Should be the ideal weight of Red Coral / Moonga?

Red Coral has immense benefits if it suits the wearer. So, even if you have got the green signal to purchase Red Coral, then the next big question should be – what’s an ideal weight to wear?

Astrologers suggest that one should always wear 1 Ratti for every 12 kilograms of body weight. That means that if your weight is 60 Kg, then you should be wearing approximately Red Coral weighing 5 Ratti.

This is a fair calculation, but there few other factors that needed to be considered too. For instance, a better quality average size gemstone will give better results compared to a huge size low quality one.

An astrologer might also suggest you different size after looking at your chart. Please keep in mind that an overweight and underweight gemstone has lots of adverse effects. So, to evaluate the ideal weight, one should always follow the astrologer’s suggestion.

How To Wear Red Coral (Procedure) 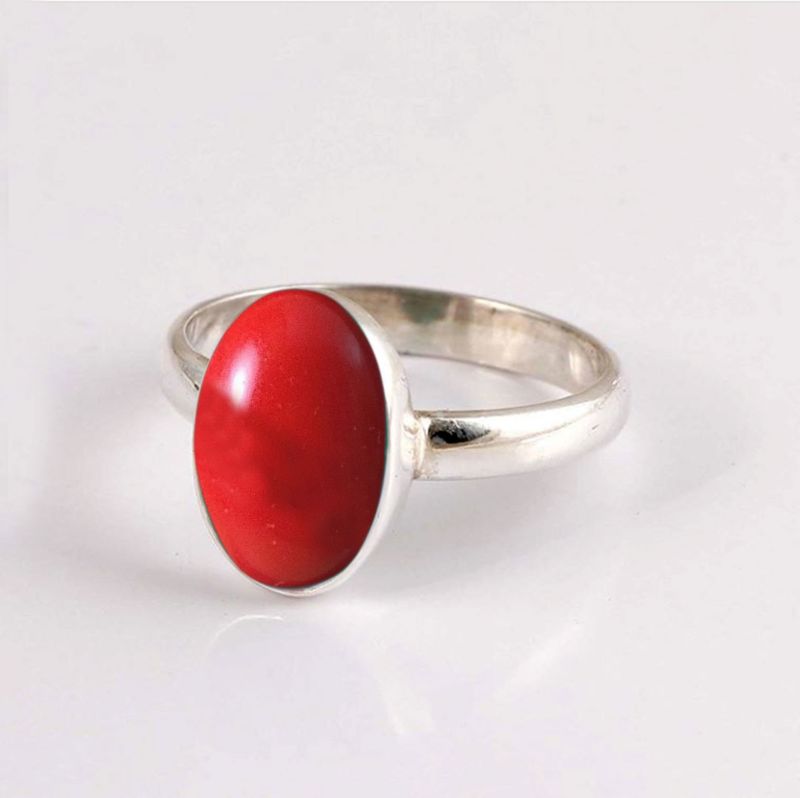 How To Wear Red Coral

To attain the best results from Red Coral, one needs to follow a few things. If you are wearing the stone as a ring, then the ring should be in copper. The best day to wear Moonga is Tuesday of Shukla Paksha (Waxing Moon).

Next, you need to start the purification process to activate the gemstone. To activate the gem, make a mixture of milk (unboiled), honey, and pure water. Dip the ring in the mix for about 20 minutes.

At that time, you need to burn a few incense sticks near and pray to Lord for better life and wellbeing. Next chant the following mantra 108 times –

You need to chant any of the given mantras 108 times. Once done, take out the ring and wear it on the ring finger. This is the procedure to wear a red coral gemstone. Make sure to clean the ring at regular intervals.

If the stone that you have worn is of good quality and a natural one, then you should be getting the results within 30 to 60 days.