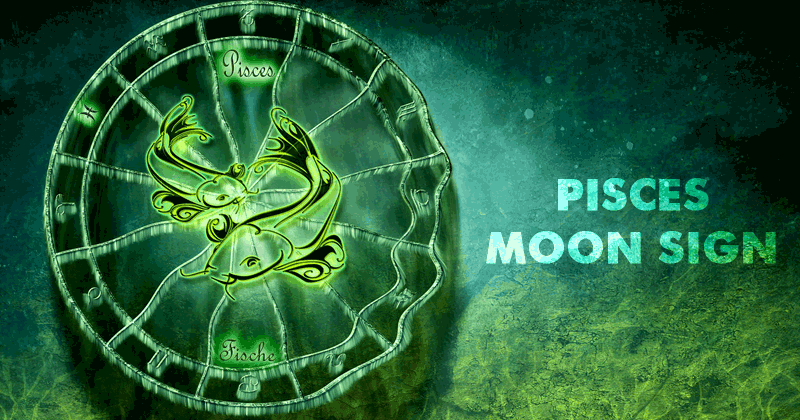 After knowing about Aquarius Moon, we have now moved towards the Pisces. Pisces is the last sign of the zodiac and its a water sign. The symbol of Pisces is a pair of fish swimming in the opposite direction. Jupiter and Neptune rule Pisces.

Pisces is a water sign that means those born with this sign are likely to be intuitive, emotional, and ultra-sensitive. They can be mysterious as well. With Moon in Pisces, which is ruled by Jupiter and associated with the 12th house, these people are likely to have high imaginative power.

Those born with Moon in Pisces are usually very creative, and their creative talents often flow towards the abstract art forms like painting, writing, photography, etc. These people have a highly creative mind which often has amazing and unique ideas which others can’t understand.

Pisces usually feels comfortable when the world around them is beautiful, relaxed, and pleasant. However, if it isn’t, then they tend to find comfort in the imaginative, the creative forces.

Pisceans got a unique ability to sense the hidden or energetic things of life. These people can easily sense the emotions of people around them at utmost accuracy, and they can feel other’s emotions like their own. However, this ability also invites some troubles as Pisceans sometimes finds it difficult to differentiate between emotional reaction and intuitive response.

Being a Water sign, Pisces is also one of the most emotional sign, so they experience every emotion intensely. These individuals are very sympathetic, and they are more likely to see the best in the other person. Since they have an innate ability to absorb emotions like a sponge, sometimes they soak up a lot more than what they can actually handle.

The strong point of Pisces Moon is their imagination power. They can quickly figure out what others are feeling along with the mood of the atmosphere around them. Pisceans can put themselves in anyone’s shoes at ease and can understand their emotions. However, their ability to absorb the emotions out of anything also makes them sensitive.

Along with that, these individuals also got a vivid imagination, and they can see through the possibilities that others can’t even think of. It will be of great advantage if Pisces borns learn how to turn their imaginative powers into something creative.

Since Pisces is a water sign, these natives were usually in touch with their own emotions. They really have a good understanding of other’s emotions, and they can be the best person to speak with during mental turbulence.

They are also very intuitive and usually rely on their intuition while taking a decision rather than trusting on facts and figures. These individuals have a loving and kind heart, looking for the same from the others.

Pisces is also a pretty romantic sign, and people born with this sign are old fashioned romantic. They are kind of people who believe in the idea of fairy-tale love. When it comes to the relationship, Pisceans are quite devoted and loyal partners. They will nurture and care for you when you really need.

Pisceans usually falls in love pretty fast and most often. Once they are in love, they often put their partner on a pedestal, so that he or she can do nothing wrong. This thing works well for Pisceans in good times, but when their partner lets them down, it becomes hard for Pisces moon to see a situation for what it really is.

They start to think about the loss that has just happened, instead of moving on. The emotions are also quite intense in such scenarios because Pisceans are always inclined to see only the best side of their beloved. Under such situations, there’s a strong urge to escape, and they do that by seeking the line of least resistance.

On the other hand, this thing is good for Pisces women because it allows women to explore and develop their sensitive sides. Pisces men need to learn to love themselves more than they love others. Pisceans usually discovers their biggest strength and the most worthy reason to sacrifice in love.

On Pisces, there’s an innate urge to escape. They sometimes just want to withdraw periodically from the demands and responsibilities of life. Pisceans wants to spend time alone, meditate, enjoy nature, and do almost everything that requires to replenish their sensitive, emotional system. If that thing never happens, they can’t cope with the demands of life.

When the urge to escape becomes unbearable, Pisceans can rely on drugs, alcohol, or other means of addiction to escape from the demands of this world.

Being a water sign, Pisceans are sensitive towards whom they are extremely receptive. They tend to lose themselves in the feelings and problems of others. It’s also a sign of compassion, so, Pisceans are likely to be indulged in the acts of kindness to others.

You will find Pisces Moon borns offering selfless acts of services to others in need. Offering selfless services or help is a good thing, but they need to recognize their boundaries so that their compassionate and helping nature are not taken advantage of.

Pisceans are highly imaginative and born with vivid imaginations. However, they also tend to get lost in their own imaginative world. If anyone tries to put drag them out of their fantasy world, they become overwhelmed with reality.

Pisceans tends to observe the complexities around them silently, and they often get lost in their own imaginative thoughts, making them absent-minded. Since its a highly sensitive sign, Pisceans becomes discouraged quickly and often suffer from self-pity.