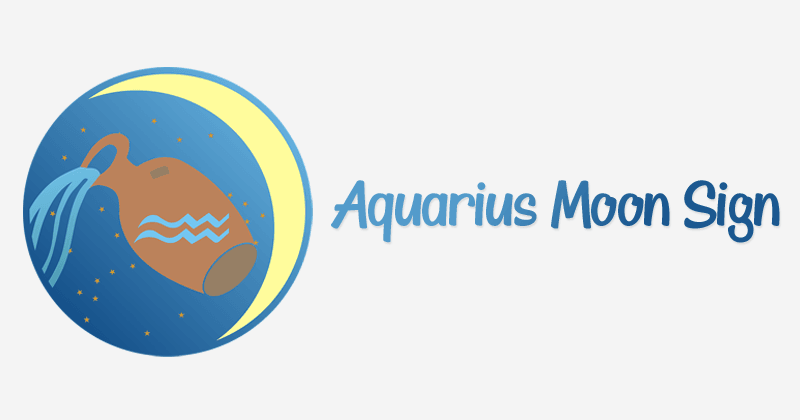 As we know, the Moon sign in astrology represents our inner selves. The way we think, our emotional state, our feelings, deep desires, etc. are all described by the Moon sign. The element of Aquarius is Air, and the quality is Fixed. The ruling planet of Aquarius is Saturn, and it’s represented by the astrological symbol of the Water Bearer.

Since Aquarius is an Air Sign, Aquarius is all about action, motion, and ideas. It’s also a Fixed sign that means these people often lay a strong foundation before they start to build. Being a Fixed sign, people born with Aquarius Moon have lots of patience and concentration.

Moon in Aquarius – The Inner Self & Mind

Aquarius is an Air sign which belongs to ideas, concept, and communication, along with that Aquarius is a fixed sign as well. So, with these two combinations, Aquarians were likely to have the qualities of perseverance, endurance, and focus.

Aquarius Born have something in themselves that separates them from everyone around. Aquarius is also one of the least emotional signs of the zodiac, and these people feel more comfortable with their ideas and words. It was also because most of the Aquarius borns grow up feeling ‘different’.

Since they feel more comfortable with fact & concepts, these people usually face difficulties while understanding others who are driven by instinct or passion. It was also because of their nature, which forces them to stay away from situations which demand emotional involvement. Those born with Aquarius Moon doesn’t give emotions like ‘Jealousy’, ‘Possessiveness’, ‘fear’ much value.

They believe that everything happens for a reason, and they seek objectivity and reason while dealing with other’s emotions as well. With that, we don’t mean that they are not generous, but they prefer to support or nurture others from a distance without getting emotionally involved.

The tendency to feel comfortable with facts and concepts is also the biggest strength of Aquarius Born. Because of that, Aquarians can rise above all emotional troubles and see the actual story.

Those born with Aquarius Moon are likely to have a futuristic outlook, and their mind are usually filled up with innovative ideas. They usually have a magnetic personality because of their social skills and virtuosity.

Those born with Moon in Aquarius were also known for their progressive streaks. You won’t find Aquarius stuck in the past because they don’t have much space for emotions. They are keen observers as well and can interpret the world and people around them at 99% accuracy.

The great strength of Aquarius born relies upon their point of view. They usually have a high level of detachment that often gives them a unique point of view. They got the natural ability to eliminate all dramas and see the actual story. Decisions that Aquarius takes were often based on facts and concepts rather than depending upon the emotions and feelings.

Those born with Aquarius Moon Sign can strike up a conversation with almost anyone. They like to discuss facts and concepts with others and expect the same from the other one. Aquarians were not usually quick to pass judgment because they don’t have any space for ‘ego’, ‘attitude’, ‘fear’.

They got the natural ability to accept others as they are. Most often or not, their unbiased approach towards others often grabs them lots of friends, and others admire their open and accepting attitude.

The other positive side of Aquarius born displays their friendly, charming and intuitive nature. They often have a childlike nature questioning about things that don’t make sense. These are the independent people who expect others to be as detached and independent as they are.

Since they don’t give much value to emotions like ‘Fear’, ‘Jealousy’, ‘Attitude’, they avoid certain situations where emotional involvement is necessary. Those born with this sign have lots of friends, but again due to their nature, they never let anyone get very close to them. This nature also makes them distant and aloof from others and this is why Aquarius borns were often loners at heart.

The inability to feel normal is one of the biggest insecurities of Aquarius Moon. They think differently from other signs, and they are more likely to pick up the most uncommon thing. Due to this, sometimes other people often take Aquarius as weird and strange.

Since these people have their own unique perspective to look at life, they know what’s right and wrong for them. Due to this, those born with this sign often display the quality of being very stubborn. This is also a sign of radical change that means those born with Aquarius moon also tend to experience constant change. This nature sometimes makes Aquarius born unpredictable.